The year is 1953.  In the cramped TV studios of WXYZ Marv Welch waits patiently under a bank of hot incandescent lights for director Pete Strand to give the signal from the control room.  He raises three fingers…two…one, then signals ET man Lytle Hoover to play the theme song  . "Roll music!"

“Taxi your tricycles close to the screen.

Take your dolly by the hand.

For there are many wonderful things to be seen,

The red light of camera one flickers on as Wixie jumps into view. For the next 60 minutes the elf-like man in the blue tunic charms the children of Detroit. What Wixie’s young fans didn’t realize was that their beloved pixie pal spent his evening hours entertaining mom and dad at some of Detroit’s hottest supper clubs.

Marvin Welch Jr. was born on October 14, 1925 in Detroit, Michigan. His parents, Marvin Sr. and Amelia, were nightclub entertainers. Times were tough during the Great Depression but the Welchs managed to get by, sometimes performing at neighborhood piano bars for a free meal and a few dollars. When Marv Jr. arrived on the scene his parents couldn’t afford a sitter, so Amelia would hide her son behind the piano while she performed.

The youngster found himself on the other side of the piano when his parents discovered that their son had a beautiful Irish soprano singing voice. The customers found the talented tot irresistible, so they showered him with spare change.

Music and drama were his favorite subjects in school, where he usually won the lead role in the school play. At Detroit’s Mackenzie High School he sang in the choir with his girlfriend, future Prize Movie diva Rita Bell.  He attended Wayne University, where he studied liberal arts under Leonard Leone, founder of the famed Hilberry and Bonstelle theaters.

To help pay for his tuition Welch sang at Earl Gremel’s bar, in the basement of a Northwest Detroit bowling alley.  To liven things up a bit he threw in a couple of one-liners between the songs. Soon the one-liners outnumbered the songs. At the time record pantomime was hot, so the bar’s owner expected his novice comic to include it in his act. Welch recalls, “Earl Gremel tells me, “You’ve got talent. Why don’t you do pantomime?” I told him that I didn’t have any money for records. So Earl hands me 50 bucks and tells me to buy a bunch of records and learn them.” The combination of songs, jokes, record pantomime and Welch’s winning personality had the customers lined up around the block.

The “Michigan Mirthquake” returned to Detroit after the war, graduating to the big clubs like the Gay Haven, the Metropole and the Top Hat, sharing the stage with artists like the Platters, Jerry Vale, Guy Mitchell and Frank Sinatra. Welch was one of the first area comics to introduce blue humor into his act.

While working the nightclub circuit Welch met a beautiful blonde singer named Eleanor McRobbie. The two hit it off both off stage and on, and were soon married.

Welch’s first TV exposure was in 1952, when he was paired with singer Janie Palmer for WWJ-TV’s Musically Speaking, a fifteen-minute program of dinner music peppered with a dash of humor. New Era potato chips sponsored the show, which lasted for a year.

In 1953 WXYZ-TV’s programming director John Lee approached Welch with an idea he had for an early morning children’s show, Wixie’s Wonderland. Lee thought that Welch’s extroverted personality and boyish good looks were perfectly suited for Detroit’s pre-school set. Wixie’s Wonderland would air opposite rival WWJ’s kiddie show Playschool with Mary Melody, played by Welch’s wife Eleanor. Unfortunately the two were in the midst of divorce, so Welch didn’t mind competing with his soon to be ex-wife. 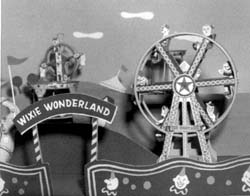 Wixie’s Wonderland made its debut in the fall of 1953. The show aired live every day with no real script to speak of, except for maybe a few hastily written ideas jotted down on a piece of paper.  Welch sang, joked, introduced Bugs Bunny and Mickey Mouse cartoons, peddled Bosco, pantomimed to records and basically ad-libbed for an hour every day. Rounding out the Wonderland cast were pert piano player Diane Dale, who sang and told stories, Gramps, the resident animal expert, played by Frank Nastasi, and mute clown Gee-Whiz, the fastest artist there is, played by Ken Muse. Pianist Marion Rivers replaced Diane Dale in 1956. 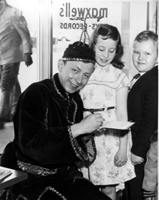 There’s been some confusion over the years as to what exactly the character of Wixie was supposed to be. Welch recalls, “I wore boots, a lightning bolt on my chest and a beanie with an antenna. I don’t know what the hell I was supposed to be.” Welch gets a bit peeved when Wixie is referred to as a clown. “I wasn’t a damn clown. I was a pixie!”

Welch recalls a time when a slip of the tongue got him into a bit of hot water. “In those days,” Welch remembers, “Rockets were in, with space ships, Cape Canaveral and all. Kids were building their own model rockets. I knew a guy who owned a hobby shop in Grosse Pointe. He had a big model rocket that he had built himself. On a beautiful summer day he brought the rocket over to the Maccabees building, where the WXYZ studios were. I had been announcing all week that on Friday we were going to shoot off the rocket. We had a camera set up in the alley to cover the big event. Everybody at the station gathered in the alley, curious to see what this rocket would do. I do the countdown like they would do over at Cape Canaveral. Three….. Two….. One….. The guy lights the rocket, and swoosh! It shoots over the Maccabees building. I yell, GOD DAMN! LOOK AT THAT THING GO!!! Well, the switchboard lit up. The dads were calling to say, “God damn, Marv, it did go, didn’t it!””

In 1953 Welch met his second wife Dolores while headlining at Harry and Alma's, at the time the hottest nightclub in Michigan. Dolores, known as "Dee," worked as a hostess in the club. Welch even owned Harry and Alma's for a short time in the 1950s. “We used to stand ‘em in line all night,” Welch recalls. “In the winter my wife used to give cups of coffee spiked with a shot of Brandy to the people standing in line waiting to get in. Some people stood in line just to get the coffee!”

Wixie’s Wonderland ended it’s run in 1957, but the character of Wixie found a new home with Our Friend Harry, starring Harry Jarkey, another nightclub comic. The show, a two-hour potpourri of music, comedy and family features just didn’t catch on with Detroit’s TV viewers, so it was unceremoniously axed by WXYZ after a year.

Welch was out of the television business, but his nightclub career prospered. “Comedy was my ace in the hole. The TV jobs ended, but I always had the clubs to fall back on.”

In the 1960s and 70s Welch made a handful of party records based on his standup routines. Released under the Polaris and Wild-Records labels, they were recorded live at the Metropole, Gino’s Surf, the Playhouse and the Roostertail.

The 1970s found Welch spinning records at radio station WBRB, “The Voice of Macomb County.” Welch called his listeners “love ducks” while playing tunes from Sinatra, Doris Day, Rosemary Clooney and other popular recording artists. Always the prankster, one April Fools Day “Marvelous Marv” had his listening audience convinced that a whale was spotted by Metro Park Rangers in Lake St. Clair. Welch had half the population of Macomb County on whale watch at Metropolitan Beach. 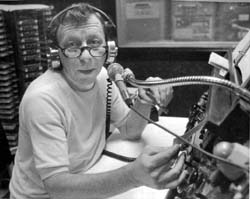 Welch passed away on February 22, 2007 after a short illness.

The era of the local children’s television show is long gone, replaced by talk shows and news programs. What little children’s programming that remains is designed mainly to be a learning experience. “I never tried to educate the kids,” says Welch, “just entertain them.” For many thousands of Detroit children, Marv Welch certainly did just that. I'd bet my last glass of Bosco on it.

Tom DeWitt’s father, Joe DeWitt, was a technical engineer at WXYZ. As a child Tom and his brother John periodically had the chance to visit the station. Tom has been nice enough to share some  of his memories of Marv Welch and Wixie’s Wonderland.

Wixie always had a live audience for his Easter show, consisting of kids of the employees of the station. One Easter Wixie gave every kid in the audience a very nice Easter basket, courtesy of WXYZ. Unfortunately, this particular Easter both John and myself were sick and couldn’t be in the audience. My father planned to pick up the Easter baskets at the station and give them to us on Easter Sunday.

When my father went to get the baskets he discovered that someone had stolen them. When Mr. Welch heard of the theft, he went out and bought two more baskets for my brother and myself, paid for out of his own pocket,  more elaborate than the ones the station had paid for. I didn’t learn this until many years later.